After being disappointed with my Springfield stop, I was looking forward to my next stop in Pittsfield to see where the Hotel Wendell had once been.  I was able to find ample information about this once grand hotel and I was excited to see the former location as well as explore Pittsfield.  I knew from my Grandfather’s letter that the scenery would be glorious, and I also knew from my research that Pittsfield is 1038 feet above sea level, so I was hoping that fog had burnt off!

“Oh Tina dear, how I wish you were with me this morning as I started for Pittsfield over the Berkshire Trail.  The scenery is beyond description, I believe that it is paradise and this morning it made me feel so darn blue, because you were so far away from me and not being able to enjoy it with me.”

“You see as you drive along a hill covered with the most beautiful arrangement of colors by nature and as you climb this hill and reach the top, you are overlooking a valley surrounded by hills and the colors are first too beautiful to describe.”

While the leaves during my drive were still mainly green, the scenery is really stunning.  I am finding out that it is hard to be both the driver, taking notes in my head about what I am seeing, and wanting to write down some notes in my actual notebook.  Once I got off Route 20, my GPS had me taking some beautiful roads where there were steep climbs, stunning vistas of both mountains and valleys.  I was relieved to be leaving the urban feeling of Springfield and literally heading for the hills.  Passing through little towns, such as Blandford, Chester, Washington Becket, and Dalton, made me realize how many towns there are in our state that I had never heard of before starting these journeys.  At 10:34 a.m., after traveling 52.8 miles from Springfield, I found a public parking lot in Pittsfield and jumped out of Sage to start exploring this town, called Power Source and Playground by the guide book 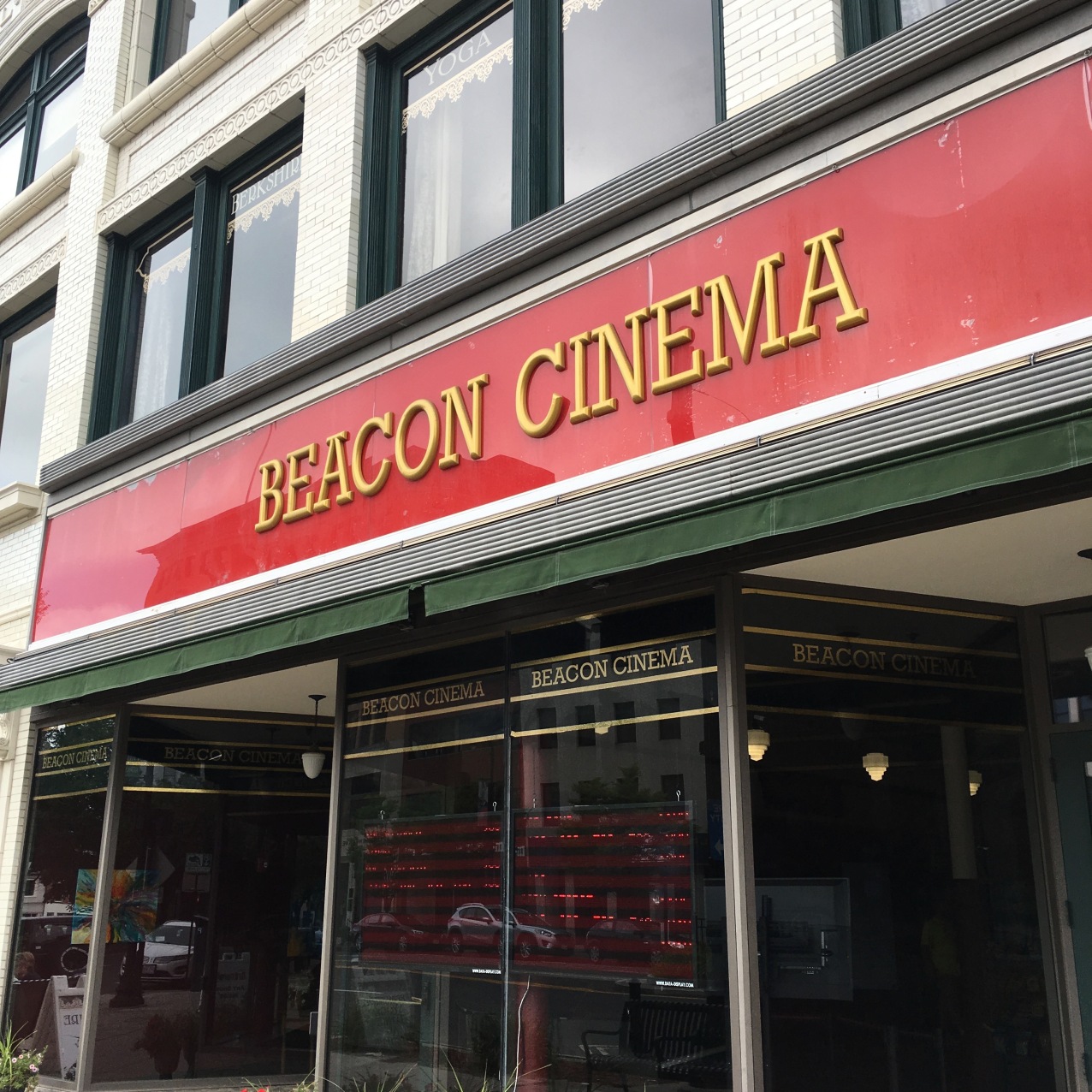 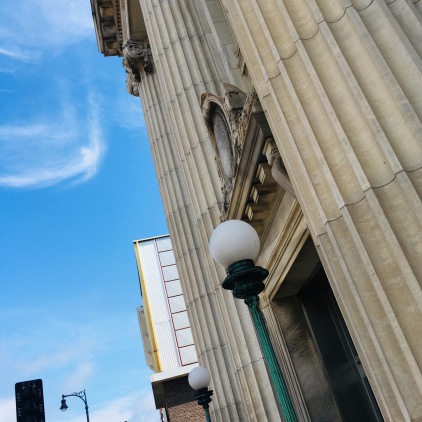 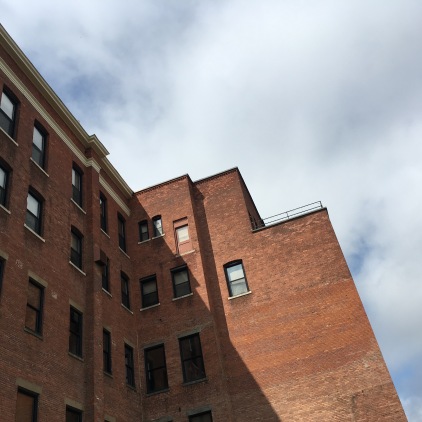 .
Pittsfield has a lot of old buildings up and down two intersecting “main streets”.  I was curious if the Beacon Cinema was an older movie theater, as my Grandfather talked a lot about going to see a movie in many of the locations where he stayed.  It was a quiet Sunday morning in Pittsfield, but there were people heading to church as well as people sitting both inside and outside the The Marketplace Cafe.  I kept continuing down South Street towards the intersection of West Street, where the hotel was once located.

Through my research, I had found out the following information about the Hotel Wendell. What is interesting about this location is that there has been some sort of hotel on it since the 1820s. The Renaissance-revival styled hotel opened up in 1898.  At this time, Pittsfield was a thriving urban setting, as well as a place where New York City residents would come to vacation. At this time, the hotel had 110 guest rooms and a 250-seat dining room.  The hotel put on two large additions, that were just about finished when my Grandfather stayed there, which made the hotel the largest in Pittsfield as it now had 323 rooms.

However, the Great Depression, World War II and then the building of the Mass Turnpike, started the decline of the Hotel Wendell as people were no longer visiting Pittsfield as much.  The hotel was closed in 1965 and demolished. Currently, there is a 14 story Crowne Plaza hotel, set back a little from where the original hotel was located and a three story commercial building in front of that.

On both the letterhead and on the envelope is the name of the President/Managing Director – N.A. Campbell.  His full name was Napoleon Campbell and he was responsible for doing the additions as well as making the era when he managed, 1924 – 1944, the most successful ones for the hotel.  He sold it to Sheraton in 1944, and it became the chain’s 18th hotel. 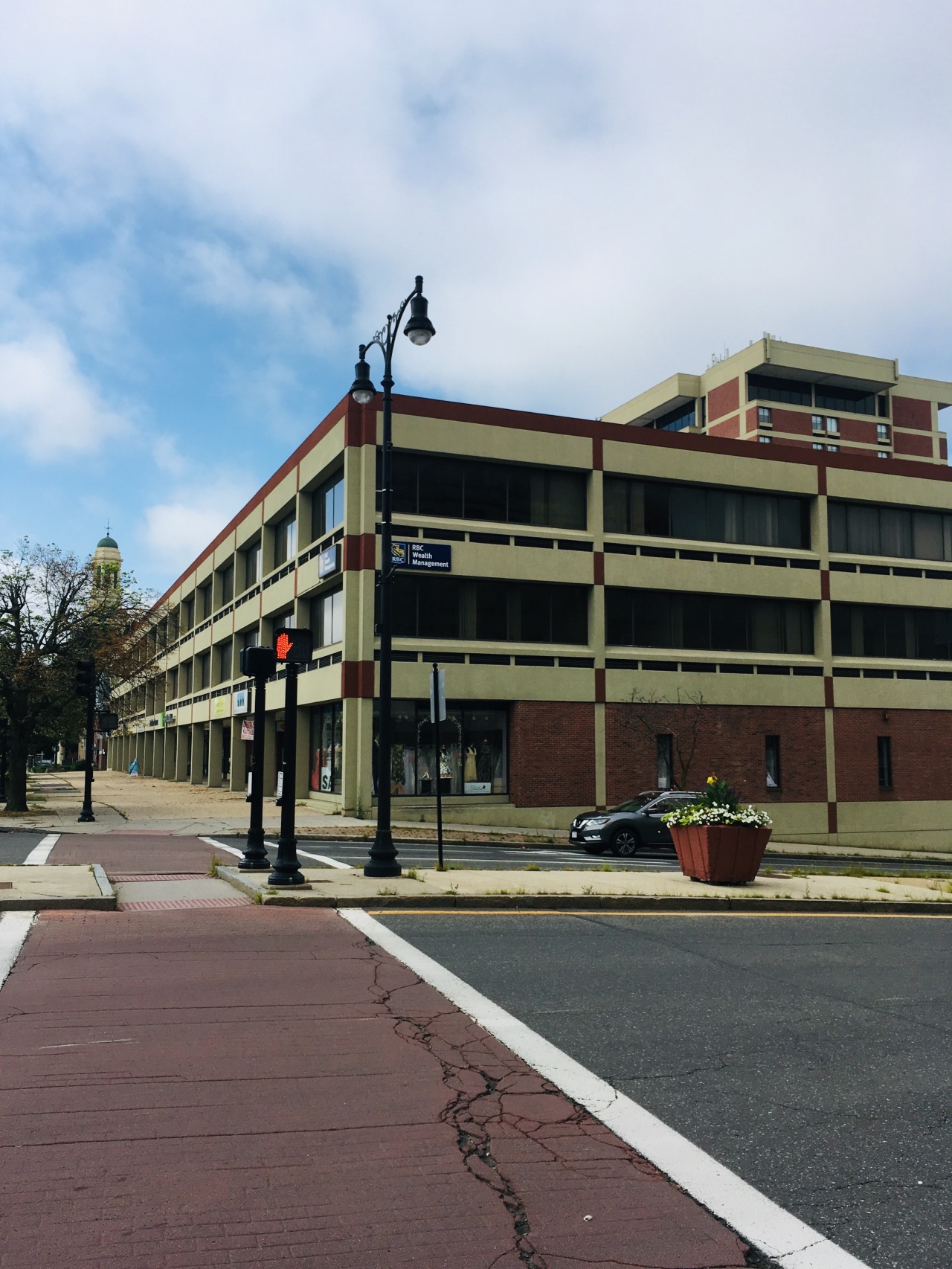 So, with this history in mind, I kept heading north towards the intersection of where this grand hotel once sat.  And across a pretty big thoroughfare, there it was – now a pretty nondescript, three-story office type building.   There were benches outside with pretty flower pots.  Across the street, was a small park, surrounded by more brick buildings.  There was no historical marker on the building that told once sat here.  Behind the building, you could see the quite tall Holiday Inn and Suites of the Berkshires.  Even though the Grand Ole Wendell was no longer there, this block still remained a hotel where people could stay when they visited the area.  What was interesting about Pittsfield is that while the population is actually 5000 people less than it was in 1930, it did not give the appearance of being like a Fitchburg.  I liked sitting on that bench and observing the Pittsfield of 2019.

After observing for a bit, I went into the Marketplace Cafe.  While you could either get a breakfast or lunch there, I elected for, yes, an iced tea and an oat and strawberry bar and sat outside at tables outside the cafe.  My ice tea was served in a glass, with a paper straw – both nice touches.   I wrote up some notes about my ride from Springfield to Pittsfield and at 11:27 a.m., set off to Route 8 for the trip to North Adams.  I enjoyed my time in this little city, envisioning what it once was like as a playground for the rich New Yorkers.

Arrived safely last night at quarter of eleven.  The going was pretty had as it rained quite hard and the “knoeps” were just crawling.  We could not pass them as there were cars coming the other way.

All the boys are stopping over at this hotel, this was the last minute arrangement, and it won’t be so bad after all.  Frank, Bill Madden, Joe Barrie and I went down to see “The Street Girl” and it sure was a fine show! Have you seen it?

A crew of salesmen are down the hall and they sure are raising merry hell for the bellhop tells me that they have two cases of gin!  They are now singing at the top of their lungs. There must be at least ten of them, so you can imagine the racket they are making, but let them be happy, we only live once.

I am quite tired this evening as I have driven seventy-six miles besides doing a days work. I still have my reports to make out beside writing a few lines home.

This evening, I thought I would drop down to see Mary, as she has written me and asked me down.  But when I started I thought I got on the Albany Road, but drove for miles and pretty soon I began to recognise the hated New York City, well, you could have knocked me over with a feather as I was just the opposite direction from where I wanted to be, well let me tell you, I started back for Pittsfield and got here at quarter to twelve, I covered one hundred and thirty-six miles.  Now I will have to postpone the trip to Mary as we are checking out of this hotel Thursday morning and are going to No. Adams for the rest of the week.

Today has been an awful day.  You know, one that is quite cold, very dark, with showers every ten minutes, goodness, but it is dreary.

All the boys are out this evening on dates, I believe they told me, and I am here alone.

Today, anything irritated me, even Frank got me angry without meaning to.  Why this morning, we went down in my car to the Railway Station, in order to get some supplies that were sent from the office and when we got there, there was to much material for my car to take down and as Frank’s car was in for repairs, it seemed that I would have to try to take care of it somehow.

Frank opened up a case containing dummies and began tossing them to me, some he threw wild and that burned me up. I finally got all the material on but there was hardly room for a hair pin to spring in anywhere.

Frank worked with me today and it was after lunch before we even got started as we were ready to start, Ed Hoffman came along and gave me six windows that had to be done today.  I got peeved and asked him how we were going to complete them, when we only had one car.

Anyway we finally had the six displays in and Frank began thinking of that girl in Greenwooed, the one who gave him a rotten deal, and he got blue as the devil, so we were a great pair.

Tomorrow, I will write to you from No. Adams and I hope that you are feeling well and are thinking of me the same as I of you.