As described in the Massachusetts book from the American Guide Series books (1937), “To the visitor arriving from points east, whether by automobile on the famous Mohawk Trail or by train through the equally famous Hoosac Tunnel, this little mill city bursts suddenly into view in a setting of striking mountainous beauty.  On the west is Mt. Greylock, 3503 feet high, and on the east is Hoosac Mountain” (p.459)

I didn’t come from the east (in fact, I was coming from the south, driving north on part of Tour 21, From Vermont Line (Stamford) to Connecticut Line (Winsted), 68.6 m, State 8.  The roads are described as Macdam road, frequently hilly and therefore slippery in winter.  The altitude also can reach 2000 feet.  This was a quick trip, taking 38 minutes to travel the 21.1 miles; passing through Lanesborough, Cheshire, and Adams before landing in North Adams.  But I had the same jaw-dropping feeling as described earlier when I entered town and saw these absolutely gorgeous mountains framing this little town.

The now-Holiday Inn, old Hotel Richmond was immediately on the intersection of Route 8 and Main Street.  There was metered parking (free on Sunday) right outside the the Richmond Grille.  There was a lovely porch outside the restaurant where I quickly decided it was the place to film and set up my Grandparents’ pictures.

When I began researching this hotel, I wasn’t finding much online except for an oral history site, done by Williams College students.  One of the participants mentioned the hotel but not a lot about its history at all.  I was surmising that the Richmond Grille was named after the Hotel Richmond.  I found the North Adams Museum of History and Science on Facebook and reached out to them.  Similar to the responses that I received when I reached out to the groups in Houlton, Presque Isle and Fort Kent, I had a pretty immediate response from this group.  This is what they said about the history of this hotel:

“ I don’t have the exact dates the hotel was built at the moment.  It was really built in stages, opening in the mid-1800’s as the Richmond House.  By 1895 a large addition was added. Sometime between 1895 and 1906, the old Richmond House was torn down and a larger brick structure was built.  I can’t remember if the Richmond was closed in the late 1950’s or early 1960’s. At that point it became the Phoenix Hotel. Then in the early 1970’s the entire south side of Main Street was torn down, including that hotel.  Since then The Sheraton Inn built a hotel on that spot, The name has changed several times along with new owners. Now it’s the Holiday Inn. I’ve sent along photos of the Richmond House, the expanded Richmond Hotel, and finally the Richmond Hotel that most people remember.”

North Adams gave me the same feeling as I had in Houlton Maine.  There was something special about this spot, the people that I had spoken to had pride in their town and a willingness to share their knowledge.  I went into the lobby of the hotel and on one of the walls there was more information about the hotel, which was really interesting.  It also appears that the Museum of History and Science will be moving into the building shortly.

After leaving the lobby, I walked up Main Street.  Despite the humidity, it was a gorgeous day to be out walking.  There was a mixture of both older and new buildings on the Main Street.  I ended up at the Empire Cafe, which was next to a really large antique/collectible store.  I was hoping to find some type of relic of the Hotel Richmond but did not find anything.  The Empire Cafe was next to the shop and I decided to mix it up and get a Green Tea soft serve ice cream, which was really tasty. 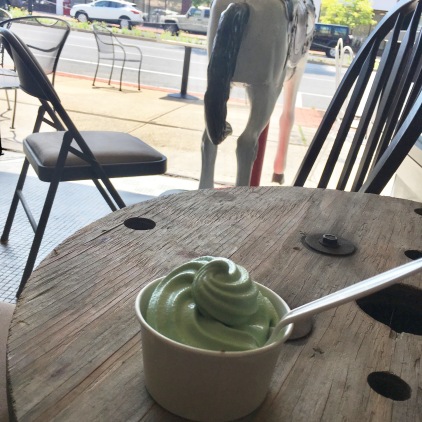 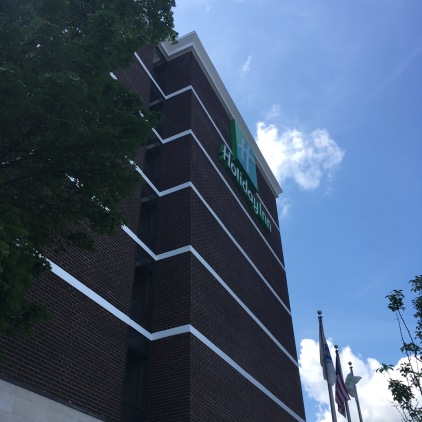 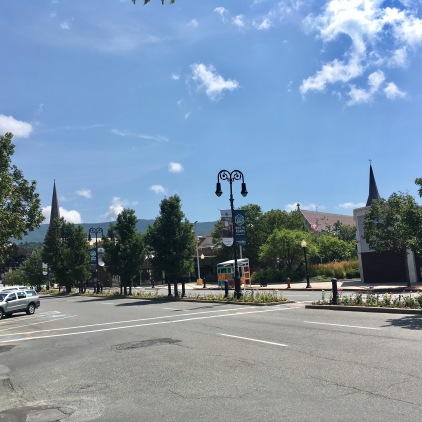 My Grandfather’s letter revealed a bit about his ride up as well as his relationship with his colleagues and his boss.

This evening I thought that I probably would feel better by going to a theater.  I saw a wonderful show named “The Gold Diggers of Broadway”. You remember seeing Broadway Babies, well I believe this show has it all over that one.  Beautiful settings, wonderful cast, and anything that you could think of to make it a perfect show. During the show, one of the scenes is of an artist and of course, you came into my mind, I wished that you were with me for it would make it much more pleasant.

Today, I went over the Mohawk Trail, as you probably know, it has been closed all year long, due to repairs and last Saturday, they opened it up, well now it is a cement road, cutting through the Berkshire Hills and today it sort of had one of these dreamy appearances, the clouds were low and as they approached the hills, they seemed to hesitate for awhile and then float on until the next row can along and they would repeat the previous act.  It sure made me think that nature turns to accord with human life.

Today, I was so low in spirits and these clouds were, and as they floated along in a lazy manner, then hesitate along the hills, well that is the way I worked, I did things because they were essential, and then stopped to concentrate and think of you.

Dear, this weekend, it is impossible for me to get back and I guess that, is final as far as seeing you is concerned because I am about one hundred and eighty-five miles from you.  That is to say that not because it is to long of a drive, but for the simple fact that we got orders to stay in Greenfield over the weekend.

I must tell you that Mr. Hall has found out that we were in Boston over this weekend and I believe that he is quite peeved about it and wants an explanation.  Of course we will tell him the truth about it, that Frank got a scare from a doctor in Springfield and hurried to his own doctor and that we thought we would try to keep it away from him if matters came to worse.  You can simply not put anything over on him. There is nothing to worry about that for it will be alright after we tell him our story.

The boys are in my room playing poker and I’m in Frank’s room writing you of course.  They seem to like my room, because it is quite large and they piled in with cards and are sill at it. You know that I do not play poker for I have a better way of spending my time than that.  As soon as I am through here I am going in to my room and tell them to scat, which I hope they will do. If they don’t, well I’ll just get in bed and fall off to sleep and let them put my lights out, but I do not think that I will do it on second thought, for they might get some foolish stunt in their heads and play a trick on me.  My address until next Tuesday morning will be Mansion House, Greenfield, Mass.

At 12:48 p.m,  Sage and I continued our journey northward towards Vermont. I would love to come back and further explore the striking mountainous beauty and what else this little mill town offers the 2019 visitor.