October 9, 1929.  Tina Dear: – I am in the writing room and in the lobby, I can hear the radio broadcasting from New York, just at the present they are playing the Indian Love Call, well I’m not an Indian, but I certainly am calling for a little dear, not so very far off from here, and I wish that I were in Saugus, fifty miles away from here.  Tina dear, I guess we both were blue Monday, for it seems like ages and ages since last I have seen you. I wrote Hall, asking him for at least three weeks around home, and I guess that my wish shall be granted. The worse of my travelling is over with now Tina dear. I am not sorry for it either. Today has been the first time this week that I had any sort of a break, for I made five calls and put in a window at every five of the calls I made, it was after one P.M that I got through but it was a great relief to have the afternoon off to myself but what good did it do me, other than I had more of time uninterrupted for thought of you, and got blue.  I watched Cushing Academy scrimmage for awhile and before I knew it, I was in there throwing forward passes to the fellows. It seemed like old times, but the only regret I had was that I did not don on a suit and had a little fun with the rest of them, the coach asked me whether or not I wanted a suit, so that I could join in with the boys, but I thought ,what would be the use, I would be so stiff from this exercise that I probably would not be able to move, so naturally, I declined the invitation. This shall be my last letter as I’ll be leaving this hotel Friday morning and be home the same night. With the greatest of expectations, Loads of love, Joe

On Monday morning, August 12th, I set out to do the Worcester County version of the 1929 road trips.  Again, the order was reversed – Fitchburg was actually my Grandfather’s last stop of a Western Massachusetts – Vermont Road Trip that took place in October 1929.  But for this trip, I had two special friends who wanted to accompany me on one of the trips.  This one wasn’t going to be long like last week’s journey, so they were excited to join in,

The Fitchburg of 1929 and the Fitchburg of 2019 don’t differ much in terms of population.  In 1930, the population was 40,692.  In 2018, the population was 40,882.  The Fitchburg that existed in the 1840s, when the American Hotel was built is vastly different than the Fitchburg that exists today.  When the American Hotel was built in 1846, Fitchburg was a booming city.  The Boston-Fitchburg train line had just opened, bringing more people to to Fitchburg.  The same train line today also brings the people who are looking for more affordable homes into Boston for work. In the 1840s, there was an increase in businesses, such as textiles, paper mills and machinery manufacturers, which drew even more people to visiting Fitchburg.  These people needed a place to stay, so in 1846, the first American House was built on the corner of Main Street and Blossom Streets. In the 2015 edition of the Fitchburg Historical Society, there is a detailed description of the American House.  This was a rather large structure, being five stories in height. The first floor was home to a dining room, lobby, kitchen and several shops. The upper four floors were guest rooms and bathrooms. In 1854, the hotel was sold.  The new owner added on an addition that brought it down to the corner of Day Street. This new hotel had rooms for salesmen to show their goods, a grand ballroom, more rooms for guests and a new tavern. The hotel became the center of the downtown area.  Many famous people, such as Ulysses S. Grant, Thomas Edison, Henry David Thoreau, Oliver Wendell Holmes and Ralph Waldo Emerson stayed there after giving talks at Fitchburg City Hall. In the late 1800s, the Cummings Theater was built next door to the American House, thereby offering even more entertainment for hotel guests.  According to the information from the Fitchburg Historical Society, the hotel did survive both fires and multiple changes of ownership until 1952 when it was closed. It was torn down several years later and the clothing store, Roger’s, was built there. This store no longer exists.  The Cummings Theater also isn’t there any longer.  With this knowledge, I was interested to see how downtown Fitchburg compared to a more prosperous time in the past.

After having used the Maine and New Hampshire American Guide Series from the Federal Writers Project, I was now switching to the Massachusetts guide.  Their description of tours was rather amusing.

“The tours which follow cover every city, town, and village in the State.  If laid end to end, they would stretch from Boston to San Francisco, but no traveler, it is hoped, will attempt to lay them end to end, or even to follow them in their entirety.  Accordingly, the tours have been so arranged that you may choose the most direct route, if you are in a hurry. If you have more time, a plenitude of more devious routes and side trips awaits you.  Tours with a number only (as Tour 1) in general follow express highways. Tours with a number followed by a letter (as Tour 1A) are alternate routes, beginning or ending at an express highway. Although less direct, they are often more interesting.  Why follow a tour anyway? Be your own gypsy, running along a main tour until you get tired of it, then branching off on a side trip, and instead of returning to the main route, doubling back on another road. The Tour Map on pages 408, 409 will help you to abandon all rules and directions and to make up your own tours.  To assist you, addresses have been given for points of interest whenever possible. If you get lost, consult the State Map in the pocket at the back. If you are still lost, never mind. It’s fun being lost in Massachusetts.” (p. 406).

With this introduction in mind, Tour 2: From Boston to New York Line (Troy), 148 m., State 2 (The Mohawk Trail), seemed to be the tour to take.  Similar to my trip to New Hampshire, where Route 3 was a suitable route, but I didn’t take it until I hit Manchester because I thought the route was not true to what my Grandfather traveled on, I didn’t plan on taking Route 2 to Fitchburg and Gardner.  I asked Google to create me a no highway option map and it put me on Route 2A. Then I went back and read the Tour 2. What was curious is at first, it definitely sounded like the Route 2 that I currently travel – it passed Pleasant Street in Arlington, Waltham Street in Lexington and then Route 62 in Concord (which includes a nice side trip to Maynard).  But after it has you passing the Concord Reformatory, it then discusses the junction with Brook Street. I could not visualize this on Route 2. After that, it says, it “follows the shore of Lake Nagog at 25.6 m.” (p.447). I stopped at this point, because what we call Nagog Pond is now on what we call Route 2A. Shaker Lane (named for a “Hill that Shakes”) , Littleton Center and Ayer are all on Route 2A, as is the Bull Run Tavern in Shirley.  At this point, “State 2 becomes more winding and passes through alternate woods and open meadows” before heading into Lunenberg. Near the intersection of Route 13, we should be able to view both the city of Fitchburg and Mount Wachusett. This should bring us right into Main Street in Fitchburg, and we will be looking for 25 Blossom Street (or around there) to see where the American House is located.  So, that is the ride we did.  At 10:25 a.m.,

Kate, Pam and I climbed into Sage, headed north on Route 27 until the intersection of Route 2A/119.  We turned left at this intersection, heading west on Route 2A, past Nagog Pond, Shaker Lane, before entering Littleton, where we turned left at the common, onto King Street, and continued to follow Route 2A.  This led us through the pretty Ayer downtown, past the Bull Run in Shirley and onto that really pretty overview of Mount Wachusett and Fitchburg in Lunenberg.  It was an easy drive into Fitchburg Center where we quickly found Day Street, and hopped out of the car at 11:29 a.m.  This portion of the trip was 29.1 miles.

Fitchburg of the present looks different than what I am assuming Fitchburg of the past looks like.  The American Hotel is has been gone for 65 years and the building that took its place is also gone.  Now there is a nondescript building, that is manly vacant.

There appears to be a campaign to bring more business back to Fitchburg https://www.sentinelandenterprise.com/2016/11/29/this-is-fitchburg-campaign-starts-with-colorful-downtown-windows-video/ .  However, when I went to explore the website, it had been retired.  There is lots of evidence of many grand old buildings that were built during the later part of the 19th century that are still standing.  Unfortunately, many of these also are vacant. 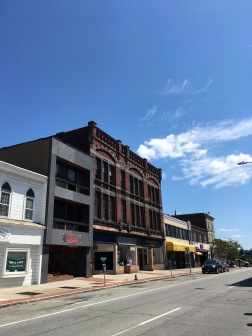 We ventured down to Strong Style Coffee, which was at the intersection of Cushing Street and Boulder Street.  Immediately after walking in the door, we knew we had found a gem.  With a very unique menu and an even more unique cafe, it offered a great contrast to the emptiness of the many buildings we had seen.  They have a great drink menu, including espresso, coffee drinks (including French Press coffee), and “Drinking Vinegars”.  I tried the Blueberry and Honey, and Pam tried the Ginger and Honey, which were both refreshing.  (And we think in the olden days, these were called “Shrubs”).  The cafe also served food, beer and wine, and hosts both musical events and trivia nights.  Outside on Boulder Street, there is outdoor seating.  I would strongly recommend if you are in the area to check this out! 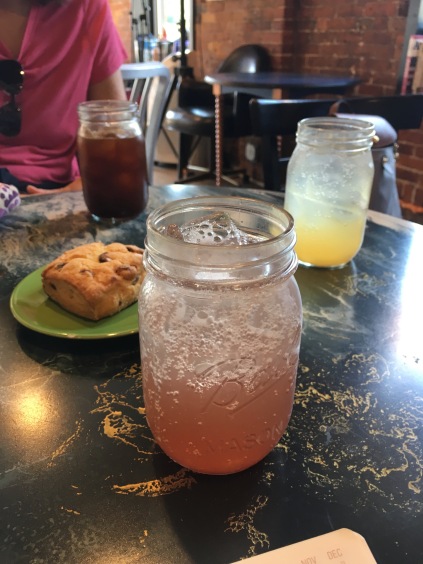 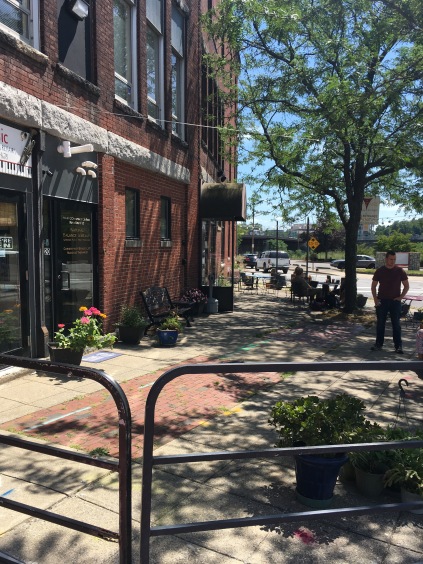 Outside of the cafe, was an area that looked like a music venue, a parking garage and a cooly painted alley way.  There was lots of neat artwork as well.  It was encouraging to see a little pocket of revitalization in this once prosperous city. 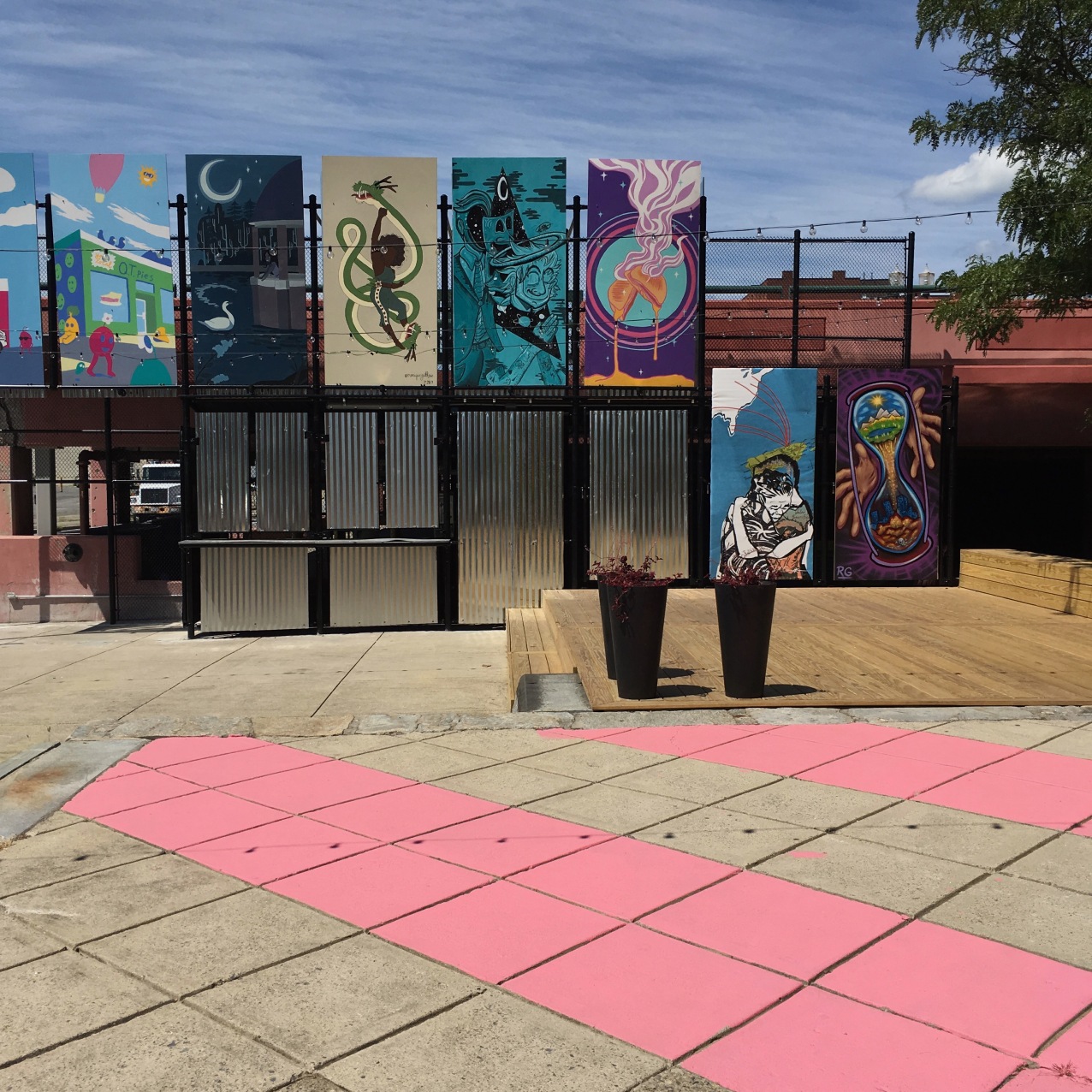 With all of the older buildings still around the Main Street, it was easy to visualize what this section of Fitchburg once looked like.  There are efforts, such as partnerships between Fitchburg State University and a group called NewVue to help small businesses in the area. ( https://www.telegram.com/news/20190421/newvue-communities-ready-to-help-drive-fitchburg-revitalization).  The Fitchburg Art Museum is also very highly regarded.  It will be interesting to see Fitchburg transform once again into a city where the modern day equivalents of Grant, Edison, Thoreau, and my Grandfather come to stay once again.

One thought on “The American House in Fitchburg: Different Times”