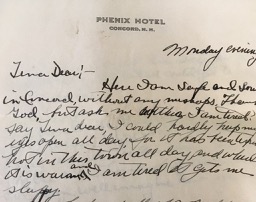 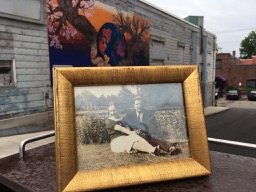 From the information on the envelope, dated August 12, 1929, it just said The Phenix Hotel, Concord New Hampshire.  It is curious that many of them do not contain a street address. This was also well before the time before zip codes were used – they weren’t formally introduced until 1963.

Monday evening – Tina Dear!  Here I am safe and sound in Concord, without any mishaps, Thank God, but ask me I am tired! Say Tina dear I could hardly keep my eyes open all day for it has been terribly hot in this town all day and which is warranted that when I am tired, it gets me sloppy.

I got in at seven A/M/ and just as I was going out of the garage, Hale called up and wanted to know whether I had left.  The garage man replied that I was just about ready to leave, so he wanted to see me before I left. I went over and he bawled me out for starting so late and also for not putting on any tin signs on my car.  I felt like telling him what was the matter with Frank, for I noticed that his car was still in the garage and he had a much longer drive than I, but I guess that I used my head and kept quiet.

I will write to you tomorrow evening from Manchester.  My car has gone 505 miles to date, not so bad?

When trying to find out about the Phenix Hotel, Phenix Hall first appeared on my Google Search.  Phenix Hall was next to the Phenix Hotel. The hall was used for a gathering spot, where Abraham Lincoln (1860) and Teddy Roosevelt spoke there.  Lincoln spoke in the “old” Phenix Hall, which was destroyed by fire in 1893 and rebuilt. Roosevelt spoke at the “new” Phenix Hall in 1912. Phenix Hall had a 500 person theater, that was used for events such as political speeches as well as boxing and wrestling matches.  Currently, there is work being done on the second floor of the building, to restore it to a venue.

The Phenix Hotel was constructed in 1857, replacing a previous building which was destroyed by fire in December 1856.  On this building, there was originally a mansard roof on top of the fifth floor. This rook was replaced in 1947 with a flat roof.  This hotel was destroyed by a fire in 1950 and in 1954 the upper stories of the building were removed, leaving the present single-story structure.  This single story building now houses a CVS Pharmacy, which was the first floor of the Phenix Hotel. If you look at the front of the building, it looks like a CVS and there are no clues that it was once one of three very important hotels located on Concord’s Main Street.  However, from the National Park’s Register of Historic Places site, I found out that from the Phenix Avenue side of the building, there would still be evidence of the original hotel. On the south wall, there would be the original “rusticated” wood siding that would have a series of applied pilasters.  A pilaster can be described as a rectangular column that is built into a wall for either structural or decorative purposes. On the same wall, there would be five windows that are blocked, but would still have the wood moldings over and under the windows. The windows are also three different sizes. On the east side (back side) of the building, it will still appear to be two-storied, constructed from both granite and concrete blocks and bricks.  There will also be evidence of the arched windows, although those too will be filled in with bricks.

From the American Guide Series, written by the workers of the Federal Writers’ Project of the Works Progress Administration for the State of New Hampshire in 1938, I found out that when this book was published, the population of Concord was 25,228 and that there were seven hotels in the city.  In 1936, the Merrimack River’s flooding caused a third of the city to be totally flooded. Another interesting fact that I found out that connected Lowell to Concord New Hampshire was that a series of canals were also created to connect Concord New Hampshire to the Middlesex Canal, which went to Boston.  This enabled people to be able to trade goods easier. However, when the steam railroad connected Concord to Boston in 1842, people no longer used the canals for transportation.

I did the trip in reverse order from what my grandfather did.  The first stop was in Manchester NH and from there, I traveled onto Concord.

This part of the trip is listed in the New Hampshire American Guide Series as Tour 3: From Lowell to Second Connecticut Lake. From Manchester (mile 22.6)  to Concord in 1938, you would go US3.  Eight miles into this ride, you would enter Hooksett.  4.5 miles further, you would then enter Pembroke. At mile 41.9, you would enter Concord.

After visiting Concord, I will be taking Tour 15: From Concord to Fitchburg and returning back to Maynard via Rt 119

At 9:33 a.m., I did a U-turn on Merrimack Street and turned right onto Elm Street, going north.  (Note – I still had a little time left on my meter – the meter prices were really reasonable!). IN a couple of miles, Route 3 turned to the northwest, and I continued to follow it through multiple towns.  The road wasn’t particularly scenic – there were many strip malls on both sides of the road. Route 3 took a turn to the right, and I stayed on Main Street, heading towards Route 3A. This road runs parallel to Route 93 and did also cross over Route 89, both major interstate highways.  With a little help from my “local” guide, aka my friend Jane, I found the parking area behind the Main Street and arrived in Concord at 10:20 a.m .The odometer now read 68.2 miles, so the trip took me 47 minutes (included a wrong turn to find the parking area) and it was 18.5 miles in total.

I met up with Jane and we took a quick walk across Storrs Street to Depot Street and then to what was almost an alley, but was known as Phenix Avenue.  And there it was – the

back of what was the Phenix Hotel. It was really exciting to see what was actually part of the building as I imagine that most of the places I will be seeing no longer exist.  The building was just as the Register of Historic Places described for the most part. The elevation of the back of the building appeared to be closer to two stories in height. This long wall was completely constructed of bricks and there were a combination of longer rectangular windows, shorter rectangular windows and partially arched windows.  There was eleven bricked up windows on the higher level and about ten windows on the lower level. Additionally, there was a back entrance for CVS employees and parking alongside the building.

On the southside of the building, that ran along a small alley out to Main Street, the building had a foundation of concrete blocks, and then the wood siding, although very weathered, was a combination of white and gray paint, that also showed some evidence of blue paint existing once.  This was especially evident on some of the pilasters as well as some of the siding towards the lower end of the building. On this side of the building, there was also a large mural, which was part of the Haley Rae Martin Mural Project, which provides teenagers the opportunity to create art that hangs on public buildings. This particular mural is based on the theme of Nature and Community. 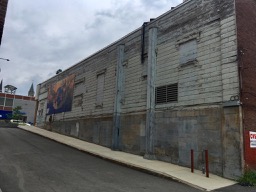 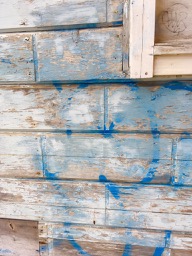 Jane and I ventured inside the CVS as I imagine that once upon a time, it served as a lobby area for the Phenix Hotel. The floor was extremely creaky and slanted in spots, a reminder that perhaps under the carpet lay the original flooring for the Phenix Hotel.  The developer who is working on the Phenix Hall also has plans to renovate this building once the CVS’s lease runs out. If that happens, I will certainly be back to explore this building more!

In front of Phenix Hall, Jane and I enjoyed a really leisurely lunch at The Works Cafe.  There was a large variety of items on the menu, and I opted for the Vegan Roll-up – hummus and vegetables, wrapped in a sweet potato wrap, along with an ice tea.  We sat outside at a table, that luckily had an umbrella (which was needed to dodge the raindrops!). The sandwich was outstanding. The iced tea was what one would normally find at a restaurant – it was good, but not anything special.  The Lowell iced teas have set the bar pretty high! It was great to be able to eat outside and observe both people and buildings. After our very leisurely lunch (and with several small showers and more ominous clouds on the western sky, I departed Concord at 1:07 p.m. While sitting outside at lunch, I noted that there are still many older buildings in downtown Concord area.   Passing through several streets, there were many interesting looking shops that would also be great to come back and explore in the future. I followed Jane out to 202 West. Unfortunately, quickly after getting onto Route 202, I encountered heavy rain, which didn’t allow me to really take a good look around.  Like Route 101 earlier in the day, this was also a one lane (each way) 55 mile per hour road. Initially it was Route 202/Route 9, but then, Route 9 went west while Route 202 merged with Route 147 to go southwest. There was a fair amount of trucks on the route as they were not allowed to stay on Route 9. During breaks in the rain, the town of Antrim, seemed like a neat old mill town.

I decided also to stop in Peterborough, one of my favorite towns. This ride took one hour from Concord, probably due to the heavy rains.  On my stop-over in Petersborough, I stopped at Aesop’s Table, which is part of the Toadstool Bookshop, one of my favorite places.  Feeling a little iced tea out, I decided to try a “Butterfly Lemonade” which was freshly squeezed lemonade with blue pea powder. It was a tad too tart for my liking.  An interesting note was that this cafe only uses paper straws! After a 21 minute break, I departed again in heavy rain on Route 202, turning east/southeast onto Routes 123/124. These rolling hilled road also was pretty high speed and I pulled over several times to allow a truck and a dump truck pass by me. After a nine minute break in Acton to pick up an ingredient for supper, Sage and I pulled into the garage at 4:00 p.m., and at 156.2 miles for the day.  The Tour 15 part of the trip was 88 miles in length and it rained a good majority of that leg.

It was really rewarding to actually step foot into one of the places that my Grandfather had visited.  I could picture a wooden lobby, with the desk clerk’s area, and probably an ornate staircase as I walked around the creaky CVS.  Following in the footsteps of my Grandfather in 1929 has allowed me to both experience the places he went to and to learn more about the man I never knew.